Why Do We Run?

From improved fitness to disease prevention; the health benefits of running are endless, but what about the mental gains? H&W investigates why we really run

It’s true. When I’m out running and my legs feel heavy, my heart is pounding and I’m pushing myself for that PB, I find myself asking: ‘why am I doing this’? Running is hard, and let’s face it, it can hurt. But I can’t be the only one to question my motives. It’s been proven that just an hour of running boosts our longevity, seven hours at a time, but there are plenty of other forms of exercise that mimic the same benefits. So, what is it about pounding the pavements that keeps us, well, running back? Perhaps it’s to soften a stressful day at the office or burn off that brownie you ate at lunch time (hey, we’re not judging). Whatever your reasons behind lacing up your trainers, there’s no doubting the activity creates a feeling like no other, which these runners just can’t get enough of.

If someone is looking to increase their exercise levels, more often than not, many will turn to running – just ask the millions of people who followed the Couch to 5k programme in a bid to form a regular exercise habit. With a record two million of us jogging at least once a week and 1,639 parkruns (the free, weekly timed 5k that takes place every Saturday in more than 20 countries), those reaping the benefits of the activity must really be on to something. Aside from the physical benefits (burning calories, strengthening muscles and improved fitness), running can help you turn back time, literally. A new study from the American College of Psychology has found that for first-time marathon runners, the training and completion of the marathon resulted in reduction in blood pressure, which was equivalent to shaving four years off their cardiovascular age.

Although a marathon is an extreme challenge, there’s always a background story to how the participants got into running in the first place. For Amy Lane, Well Far podcast host and author of I Can Run (to be published in April 2020), it was all about aesthetics in the beginning. “I started running when I first moved to London and needed something to balance out the other excesses in my life,” she explains. “In my 20s, running was a way of burning calories, to get thinner and ultimately lose weight. Then, I discovered the London fitness bubble and started to go to lots of workout classes, where running quickly got forgotten about because there were new and exciting ways to burn fat.” Amy wasn’t – and won’t be – the only one to resort to running to lose weight. According to a survey conducted by managers at Pure Gym, cardio for weight loss was voted as the most common misconception about training, and you can’t blame people for thinking that. Running can be done almost anywhere and seems perhaps a little less daunting than approaching the weights rack in the gym. Unlike many other sports, you also don’t have to get a team together to join in or hire a space to do it, making it accessible for everyone. But aside from weight loss, running has the ability to give us an exhilarating feeling like no other, scientifically proven to keep us coming back for more.

Many runners can vouch for that addictive feeling you get when out pounding the pavements – even Amy describes how she got “hooked” on it. So, what’s behind the omnificent ‘runner’s high’? “With the right workout in the right conditions, our brains trigger the release of endorphins, which can flood the body with feel-good chemicals,” says sports psychologist, Chris Shambrook (planetk2.com). And the reason for craving this feeling again and again? “Given our desire to re-experience pleasurable things, it’s unsurprising that people keep up their exercise for this reason. Just like someone can become addicted to gambling because they get the occasional win and the feelings of elation that go with it, the ‘high’ we experience during and post-exercise means we keep going back with the desire to get those wonderful feelings again.” It’s not just the brain that is boosted when we run, it’s our self-esteem too, according to Dr Elena Touroni, psychologist and co-founder of The Chelsea Psychology Clinic (thechelseapsychologyclinic.com). “Seeing your fitness levels and physical body improve can provide an instant boost to your image,” she confirms. “You’ll be feeling more confident and equipped to take on challenges in your life, simply because you have more energy.”

For rheumatologist Ai Lyn Tan, running, or specifically parkrun, made her feel reborn and, once she discovered the physical and mental benefits for herself, she started prescribing parkrun to her patients. “I knew that, in addition to medication, my patients could have a lot to gain from exercises that help with improving mobility and pain,” she begins. “Parkrun is a versatile option, as it welcomes everyone and is free. It caters for everyone’s desires, whether that’s running, walking, volunteering or even just spectating, so being among the community can provide a positive impact.” Ai Lyn would often recommend that the whole family give it a go and also inform their GPs of their new management plan. The result? Uplifted patients and more awareness about the health benefits of running, with one family claiming to have “never looked back.” Five-time Olympic champion and Saucony UK ambassador, Jo Pavey (saucony.co.uk), also finds that running is something you can do together as a family. “I love the feeling of freedom I get when I’m out for a run. We enjoy going to the forest, where my husband and I will run, while the kids have fun whizzing along on their bikes. It makes me feel more positive, confident and motivated in other aspects of my life.”

In the end, running helped Amy to find balance. After being offered a place at the London Marathon a few years ago, she fell back in love with the exercise again. “My marathon journey taught me so much about myself and how I treated my body. Running gives me this immense head space which I don’t get anywhere in my life. I sort out a lot of my problems while running without realising it,” she explains. “For me, running is when I’m doing something positive, which helps me to come up with solutions to my problems.”

A beginner’s guide to running

Feeling inspired by our case studies? James Poole, running coach and community manager at NURVV Run, has some tips to get you going.

When you’re new to running, every single run counts. It doesn’t have to be far or long for it to make a difference, either. Keep it short and enjoyable, and you’ll soon find you’re running for longer (and further) than before.

The first two or three weeks of running are definitely the toughest. Running is an impact sport and in the early days it’s not unusual to be sore afterwards. You can make it less tough for yourself by breaking things down into small chunks, rather than opting to do all your weekly mileage in one go. For instance, three runs of 5k over the course of a week will provide much of the training benefit of one 15k run, but with less stress on the body.

You don’t have to be fast

Too often, people associate running with going faster and winning races, but if you give it a chance, it can be so much more. Instead of worrying about speed and distance, take the opportunity to look at your surroundings or combine it with other things you really enjoy doing. For example, if you like to go for a coffee on a Saturday morning, pair it with a run and reward yourself when you get to the café. Associate running with other positive things and you will be a winner, whatever your speed.

Look after your feet

Running is a great sport, as it requires almost no equipment to get started. However, if you do get the running bug, then look to invest in a good pair of shoes. Rather than buy the ones your friend has or someone has recommended, head to a good fitness store with an open mind and get a pair that work best for you.

Running can be a team sport

While no one can do the runs for you, clubs and communities can be a great way to make friends, get advice and learn to improve. England Athletics’ Run Together initiative is a great way to find groups local to you, while parkrun has a super-supportive community.

It’s important to not get too obsessed with distance and speed at the beginning of your running journey. However, keeping track of your times or distances can be a motivational way to see improvement. There are plenty of apps available to help you track your progress, but at the beginning you can just write down times and stick them on your fridge.

A love letter to running

After going through divorce and depression in her 20s, Bella Mackie’s life was saved by exercise. Here’s what made her start in the first place

My running started at a point when I felt I had no say in what was happening in my life. My husband had left, and I couldn’t shake off the increasingly anxious feelings that I knew at some point would consume me totally. Forgive the bad analogy, but my life felt like a horse that had bolted away from me, and I was racing to grab the reins before I lost it forever. Running allowed me to feel like I was in touching distance of those reins. No time for nausea, no duvet available. Just a challenge, or a punishment, depending on how I felt on the day. Either way, it was something I had to see through. Even on days when I hated going out in the rain, or dragging myself out with a hangover, I knew I was giving myself something good, rather than entertaining my sadness. Twenty minutes sweating outdoors is something powerful you can give yourself. And that’s true of all of us who run, hoping to tackle problems and shrug off loss and sadness. A person might look like they’re doing a casual 5k, but you can’t possibly know why they are actually running past you, screwing up their face as they pound up a hill. It’s a mundane everyday activity done by millions. But so many of them will be taking a mini-escape. Not a decision to run for the hills and never look back, but a way to willingly return to their life with a calmer mind, or a quieter brain. Running remains through it all.

For more, read this

Jog On: How Running Saved My Life by Bella Mackie, published by William Collins 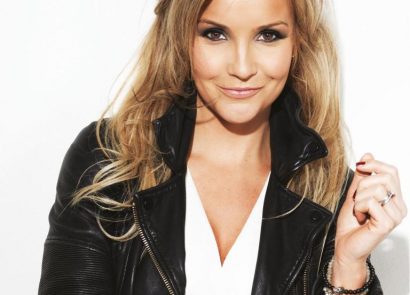 Helen Skelton: “One of my most intimidating challenges yet!”

5 Foods To Lift Your Mood 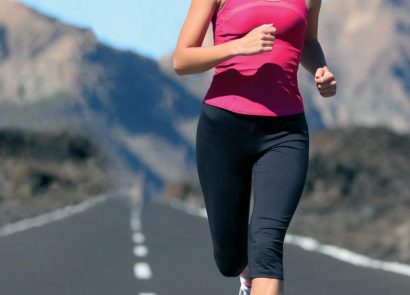 Get Better Balance in 5 Minutes