We Need To Talk About Premature Menopause

Have a life plan? Your hormones may have other ideas

Discussions about the menopause go hand-in-hand with incontinence and anxiety. We know it happens, but we don’t necessarily want to talk about it. But we must start talking about it! New research conducted by London’s Imperial College has shown that as many as six percent of women now suffer from premature menopause (before the average age of 51). With 1 in 100 entering menopause before the age of 40 as a result of unexplained premature ovarian failure (POF). So, we gathered a team of experts and asked them all about POF and what can be done about it.

Although there may be a glaringly obvious reason why a woman suffers with ovarian failure, such as radio or chemotherapy. However, for 70 percent of sufferers, there’s no medical reason at all. “A woman could have been having regular periods for a number of years and then suddenly they stop. This can happen even for women in their 20s,” says Dr Marilyn Glenville (marilynglenville.com), a nutritionist specialising in womens’ health. “The menstrual cycle can cease for a number of reasons. Including polycystic ovary syndrome, stress and pregnancy but also POF. So it is important to have blood tests to look for high FSH levels and an ultrasound scan to know for sure what is happening.” Interestingly the Imperial College study found that while the pill is not a contributing factor, the hydrocarbons in cigarette smoke can trigger egg cell death. And genetics certainly play a part too.

For many of us, hot flushes, mood swings and loss of libido are nothing new when that time of the month rolls around. It can usually be fixed with a good rom-com and a steaming bath. But POF’s symptoms run much deeper than a week-long bout of stomach cramps. “For many women, it’s a very emotional and traumatic situation to be told that they are menopausal. That they will be experiencing symptoms associated with older women. Such as hot flushes, night sweats and vaginal dryness, not to mention that you won’t be able to conceive a child,” Dr Glenville says.

As figures from the Office for National Statistics state that the average age to start a family is now 29 years old, it sits well within the realms of POF making alternative options limited. But it’s not only fertility issues that arise. During the menopause, the levels of oestrogen in our bodies decline. This is the hormone that provides protection against serious conditions such as cardiovascular disease and osteoporosis, meaning that women with POF are without that protection for 10 or 20 years longer.

“It’s important to try to replace those lost hormones but I wouldn’t recommend HRT because it tries to replace hormones that are naturally declining and carries the risk of breast cancer and heart disease,” says Dr Glenville. “However, because you’re replacing those hormones that your body really should be producing, the question of using HRT is different. So, my recommendation would be to replace those hormones in the most natural way possible, for example with bioidentical hormones which are available on prescription, until you get to the age of around 50. Then you could make the decision to come off those hormones gradually, thus mimicking a ‘natural’ menopause.”

As easy as it is to blame genetics (it always comes down to the parents, right?), researchers from the Imperial College don’t believe it’s that simple and found that a woman could be at just as much risk as a result of stress, poor diet or trauma. So, what do we have to watch out for? The biggest indication is lack of periods. “It’s very easy to let things slide and not bother having tests because, let’s face it, it’s more convenient not having periods. But there are health implications such as risk of osteoporosis if the lack of periods is caused by POF,” Dr Glenville tells us.

“Don’t be fobbed off by your doctor. Push for blood tests and ultrasounds to be done. I have seen women who have been misdiagnosed or where investigations have been delayed for years. Once you’ve been diagnosed make sure you have a bone density scan, bone turnover test, vitamin D test, omega 3/6 ratio and a lipid test (cholesterol check). Don’t be too proud to get emotional help and support. There can be a real sense of loss and bereavement. The Daisy Network (daisynetwork.org.uk) is a fantastic charity that offers support and expert advice. You may also want to discuss fertility choices. These can include egg donation, adoption or to stay positively childless. Other women are going and have gone through the same problems that you are dealing with and they can be really supportive.”

For Kathryn Price (pauseformenopause.com), POF was a reality that came too soon

18 months ago I came off the pill as my husband and I wanted to try for a baby. I started experiencing hot flushes, night sweats and insomnia pretty much straight away. Lying on the sofa at 3 am for the tenth night in a row, pouring with sweat and still wide awake. I knew something wasn’t right. It took a while to dawn on me that I could be going through the menopause. And the internet filled my head with all sorts of illnesses and diseases I could be suffering with! Premature ovarian failure (early menopause) ran in my family. Both my mum and grandma went through it in their early 40s and we had always talked openly about it. I just didn’t think it would happen to me and certainly not in my early 30s.

After seeing my GP my fears were confirmed and my world fell apart. Initially, I felt so alone. None of my friends knew what I was going through as they were all starting a family. But they have all been so supportive and I couldn’t have got through it without them. Over time I’ve accepted it and I’m coping with it. There are still tough days where I feel that my body has let me down, but the positives by far outweigh the negatives.

My top tips for anyone going through the menopause (at any age) is to talk to your GP and ask to be referred to a menopause specialist. They are best placed to give you advice. You may need to be persistent in getting a diagnosis. But you need to listen to your body as you can normally tell that something isn’t right. If you have a daughter and you have been diagnosed with early menopause, arm them with as much information as possible. And be open so they can decide if they want to get their AMH (anti-mullenian hormone) levels tested to monitor egg production. Also, don’t let the menopause define who you are, talk to your friends and family. Let’s stop it being such a taboo subject.” 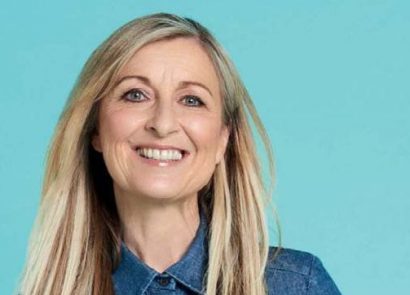 What Does Fiona Phillips Eat In A Day?

Adele’s Weight Loss: What Is The Sirtfood Diet And Can It Help Me Lose Weight Safely?

Should You Be Weighing Yourself Daily?