Expert Tips To Outsmart Your Cravings

Feeling pulled towards the chocolate cake in the office rather than the fresh fruit basket? Here’s what your cravings mean and how you can tackle them

Picture this: a 6am spin class, being run off your feet all day with back-to-back meetings and your children are suddenly incapable of tying their own shoelaces. It’s now 4pm and what you want more than anything else in the world, more than the jumpsuit you’ve been saving up for, or the week-long break that you’ve been ogling during your lunch hour, is the bar of milk chocolate kept in your colleague’s drawer. We all know the difference between fancying a bit of ice cream and wanting it so badly that you’ll send a disgruntled partner to the shops at 11pm to retrieve it. Trying to resist a craving is no mean feat, so we turned to food psychologist Dr Christy Fergusson and nutritionist Emma Brown, (nutracheck.co.uk), to find out why we have them and how to outsmart them.

So, what exactly is a craving?

If we’re going by the Oxford Dictionary definition, a craving means a ‘powerful desire for something’. But buckle up, because the psychology behind it is a bit more complex than that. It turns out that food cravings are caused by the regions of the brain that are responsible for memory, pleasure, and reward. “We often get a craving when our blood-sugar levels take a dip, but an imbalance of hormones, such as leptin and serotonin, can also cause food cravings,” explains Dr Christy. “We get a release of serotonin when we do indulge in that urge.” While a craving may seem impossible to resist, some experts believe they last about three to five minutes. So why do they feel so impulsive? According to the Alcohol Research And Health Journal, daily stress can paralyse the prefrontal cortex in the brain that looks after concentration, planning, and judgment. As a result, impulses take a stronger hold over our behaviours, which explains why we feel the need to eat more carbs following a stressful day at work.

Does a craving mean i’m deficient in a mineral or vitamin?

Yes and no. Confused? Well, it’s less common for our cravings to be due to any nutritional need, explains Emma. “There’s plenty of evidence to suggest that in most cases, they’re caused by a variety of psychological cues,” she says. “When was the last time you craved broccoli for its vitamin C benefits? I’m guessing not recently! How about chocolate, sweets or crisps? These foods are rarely rich in important minerals and vitamins, but they are high in sugar, fat and salt, three somewhat ‘addictive’ nutrients. We don’t tend to crave these foods for their nutritional benefit, we crave them for their immediate gratification.”

Why do I always want a snack at 4pm?

The golden hour where, somewhere between lunch and finishing up the workday, we inevitably end up in snacking territory. “Foods like chocolate contain caffeine, which is a stimulant,” says Christy, “and our brain gets to know that certain foods create these triggers.” Our bodies are very good at recognising routines, so once we start snacking around 3-4pm, it’s hard to stop.“Many of us find we crave sweet foods at certain times of day,” explains Emma. “That can be around mid-afternoon to beat the energy slump, after finishing our evening meal, or while relaxing and watching TV. These habitual or psychologically triggered cravings are rarely down to a nutritional need for sugar.” The good news, is that it doesn’t need to be caloriedense, nutrient-poor sweets and chocolate. “Try snacking on dried or fresh fruit and low-fat yoghurt instead,” advises Emma. “Or why not bake an apple and sprinkle it with cinnamon?”

What’s behind my chocolate craving?

“Chocolate cravings are pretty common,” says Emma. “But as we know, once we start eating chocolate, it’s hard to stop. If you’ve tried to resist, but the craving beats your willpower, choose something that not only satisfies your craving, but has added benefits too.” The best thing you can do? Stick to high-quality chocolate. “The higher the cocoa solids the better,” says Emma. “Dark chocolate is a much better choice than milk or white chocolate as it’s lower in sugar, contains healthy antioxidants and has an intense flavour, meaning you’re likely to be satisfied with less. Another alternative would be to melt a little dark chocolate and drizzle it over some strawberries or banana slices – you’ll hit your five-a-day target while you’re at it!”

I’m a savoury snacker. How can I stop my taste buds from getting the better of me?

Can’t resist the crunch of some crisps? You’re not alone. “Salt is another common craving,” Emma tells us. “But it’s less likely to be because your body actually needs salt, and more because you love the flavour. Try to satisfy your craving with a healthy snack, such as two lightly salted rice cakes topped with cream cheese, or a slice of wholemeal toast with peanut butter – both are healthy savoury snacks with less than one gram of salt. These choices also offer positive nutrients such as protein, fibre, good fats and calcium, as opposed to lots of saturated fat which you’d get from a packet of crisps. It’s also possible that your salt craving could be to do with your hydration levels, so try having a glass of water to see if that helps.

For when you can’t resist something sweet…

Ignoring a craving can be hard, so when you do want to indulge, a clever way to reduce your sugar consumption is to opt for something a little lighter. Hermesetas Mini Sweetener Tablets, Hermesetas Liquid, and Hermesetas Granulated Sweetener offer the sweetness of sugar without all of its downsides. Add to tea, coffee, cereal, fruits, desserts and use in baking and cooking. hermesetas.co.uk 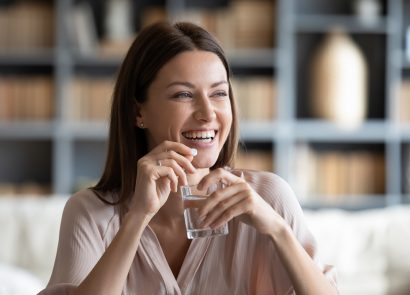 Bloating: how to beat it naturally

5 Moves To Work More Of Your Body 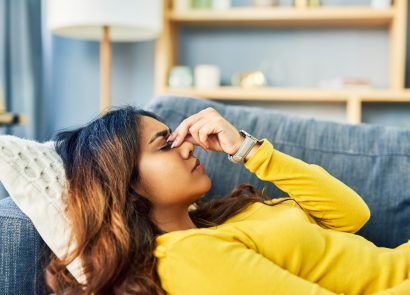 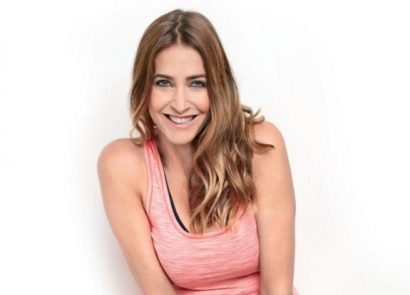